The Hardest to Learn is the Least Complicated

I've never thought of myself as even remotely athletic. I am the quiet nerd with the weird clothes who never gets picked first in gym class. Although I was a tomboy as a kid and played basketball and soccer with the neighborhood boys, I was never part of a school sports team. It just wasn't me.

But I've learned that I should never define myself, because it is incredibly limiting. Why label yourself when you are everything?

When I started running earlier this year, it was about getting healthy, losing a few pounds, feeling better. I started with the Couch to 5K training app with no goal in mind. I ran around the YMCA track in miserable one minute intervals and learned to hate the voice in my earphones telling me what to do. I dropped the training app shortly thereafter and just started running until I couldn't run anymore. It was then that I really began to push myself farther than my mind/body thought possible. Once I was able to run one solid mile without cursing the very ground upon which I tread, I moved on to two miles and then three. I was counting laps, comforted by the fact that one lap around was one lap closer to another mile. I was mildly psychotic about the whole thing.

It took me several months before I stopped saying "running is hard" whenever the topic came up. I gave myself goals and ran to achieve them, no matter what. This may seem unhealthy, but it gave me an inner power that I had never before allowed myself to feel.

I had a vacation day a few weeks ago, which was the perfect time to will myself to run eight miles. I hit the Towpath Trail and it was glorious. There was no guilt about spending time away from the kids. The house was clean. I had all day to plan and make dinner. I had two hours to do with what I wanted. And I wanted to run. It happened all of a sudden. I was a runner.

Last year, I wrote this blog post, wherein I vouched to start making more of a difference. To run the Fort4Fitness, to become a true vegetarian, to be better. These promises have been on my mind and I'm at peace knowing that I have a least made some strides in that direction.

A few words about the Fort4Fitness race:

I have to admit, I was cranky as hell about the whole thing when I woke up early this Saturday. It was dark, it was cold, and it was Saturday morning, which typically includes pancakes and cartoons with the kids. But I had made a commitment.

I headed downtown way too early, hung out in the freezing cold without a single drop of coffee and waited for an hour and a half for the race to start. Frankly, I was nervous and alone.

I was all inside my mind, thinking about my motives, thinking about Dostoevsky. Why am I here? What forces of the universe got together to bring me to this weird place where I'm choosing to be among a group of strangers, in the cold, dark morning, to run in the streets of Fort Wayne, Indiana?

Who the hell am I? I am whoever I want to be.

The race finally started and I tentatively started jogging, self-conscious with a touch of claustrophobia. I didn't think I was cut out for public running. I wanted to be out on the trail, with the hawks and butterflies. I'm not a person who enjoys groups of strangers. Antisocial, party of moi.

But as I started running, I felt an uncommon sense of solidarity with these runners. I felt their energy. I felt a sense of community. And I know it's cheesy and too easy, but it's true: I felt like I was a part of something good. There were people cheering us on from their front porch. Complete strangers had gotten up early on a Saturday to celebrate us. It was touching.

I followed a guy early on because he was slightly faster than my usual pace. I lost him around mile two and then found another runner, a tall female. I immediately liked her because she didn't just throw her water cup on the ground, but ran ahead to the trash to dispose of it. Also, she was genuinely friendly, and waved enthusiastically to the many groups of people who cheered us on.

During the final mile of this four-mile race, I wanted to step it up. My goal was to finish in under 40 minutes. Anything under a 10 minute mile is a success in my book. Also, I wanted to CRUSH IT. (I learned this expression from Nike+ and it makes me happy, mainly because I'm not one to typically crush anything.)

I was in the F40-44 division, so whenever I spotted a woman who looked to be in her early forties I sprinted ahead to pass her. I'm a bad seed, I know.

Here's the thing, I passed a woman right near the end of the race, who looked to be about my age. As soon as I ran by, she slowed down to a walk. I thought to myself, OK, one down, *evil laugh*.

The finish line was within view and before I realized what had happened, that woman who was walking in my dust just minutes ago, sprinted right past me and finished in all her f$%king glory. There I was, just enjoying my final few steps in my first timed race like I was on the damn trail with not a care in the world and I was just brought down a notch by a trickster.

Next year: half marathon. Mark my words. 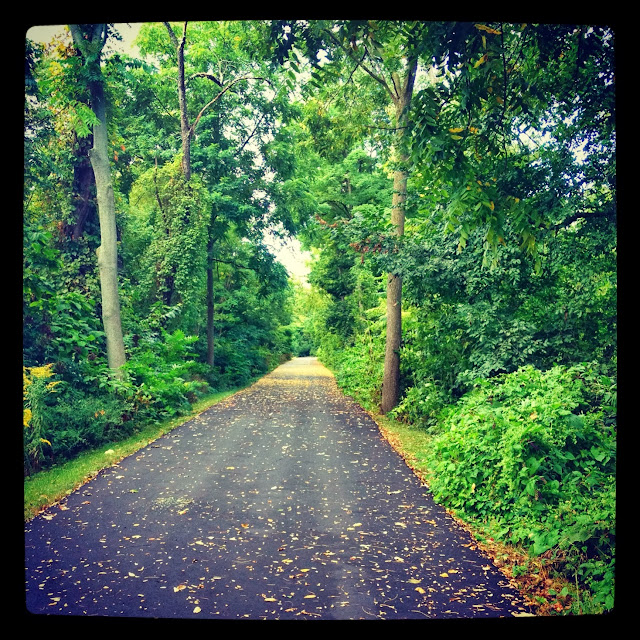