A Reflection on Running my First and Last Half Marathon

It always starts out the same way. I get to the starting line way too early and I stand alone, freezing, awkward, under caffeinated. I pretend to be cool about it and do some stretching exercises. I watch the other runners and swallow their excitement. Mostly, I yawn and dig deep into my psyche to figure out what possessed me to do this thing.

If you know me, you know that I hate people. Not all people, just groups of strangers. Crowds are my albatross. They suffocate me and wring my energy dry. It's a leaden burden I can willfully avoid and I usually do when it's cost effective. And yet, here I was of my own free will, vascillating between feelings of kinship and loneliness.

There was one couple who touched me. They were in their early fifties. The wife was the runner and the man I assumed was her husband was there to see her off. He made her pose for a photo. Frankly, I would have done the same thing because she was adorable as hell in her matching fuchsia running gear and her shy, accommodating smile. I could tell by her demeanor that she was a silent soul. He was beaming and they shared a quick kiss before we all had to get on our mark.

The first song that came on my running playlist was "Fly Away" by the Indigo Girls and I got choked up and teary eyed like a goddamn infant. My emotions tend to pour right out of my pores when I'm in the throes of a run, but this was ridiculous. I needed to keep it together. Focus.

The Cure's "How Beautiful You Are" was next and snapped me back to my senses.

I decided to follow the fuchsia lady because we seemed to run at a similar pace. Also, I knew she would be smart about it. She would start out slow and finish strong, just like they teach you in those training plans. She was even wearing a hydration belt. And here I was, without water and slightly dehydrated from last night's Merlot. I needed her.

It was amazing how steady our (my?) pace was. I got updates from the Runkeeper app every 10 minutes, and it was the same every time. Usually, I'm all over the place. Stopping every now and then to take pictures of flowers or wildlife, or sprinting ahead when the feeling strikes me. But on Saturday, I was following the rules. I was in race mode.

And I started thinking. Why do I need someone else to dictate my pace, my life? Why can't I just own this?

I've spent hundreds of hours running hundreds of miles training for this race. Why am I always so damn dependent on others, always needing a hand to hold? I can do this. I am capable. In fact, maybe I'm even more.

I decided to let her go.

Springsteen's "Thunder Road" got me safely to mile number six. I was on fire, still pacing steady at around 10 minutes per mile.

Around mile seven, something magical happened.

I found myself running right behind a guy wearing all pink, including a tutu, sparkly butterfly wings, and a tiara. He was even holding a wand.

He cheered everyone on. He waved and gave high fives to the onlookers, even the serious police officers. The little girls on the sidelines adored him, giggling with insurmountable glee at seeing a grown man dressed up as a princess. I followed this guy for a while, soaking up all his sparkly energy. He gave me hope as he broke down all sorts of barriers. You have no idea how much I wanted to capture him in a photo. It was killing me. But I kept running, fed by his beautiful spirit.

I lost him after a couple of miles. He was fast, propelled by glittery wings and all.

Laura and the kids greeted me around mile 10, just when I needed a push.

Those last few miles were rough. By the eleventh mile I crashed and started walking, exhausted. You're supposed to finish strong and just give it your all at the end. But my left foot was throbbing and my legs felt like jello on drugs.

The universe must love the hell out of me because just as I was beginning to despair, a woman came up behind me and patted me on the back. She told me that she'd been following me for a while. I had a great pace, she said. I was doing GREAT, keep going, you can do it!

Do I know her? Why is she so nice to me? Is she an angel?

That's the thing with runners. They have your back. There's a solidarity that comes with the struggle. We're all lunatics TOGETHER.

I picked up my pace. I finished, not strong, but I finished. 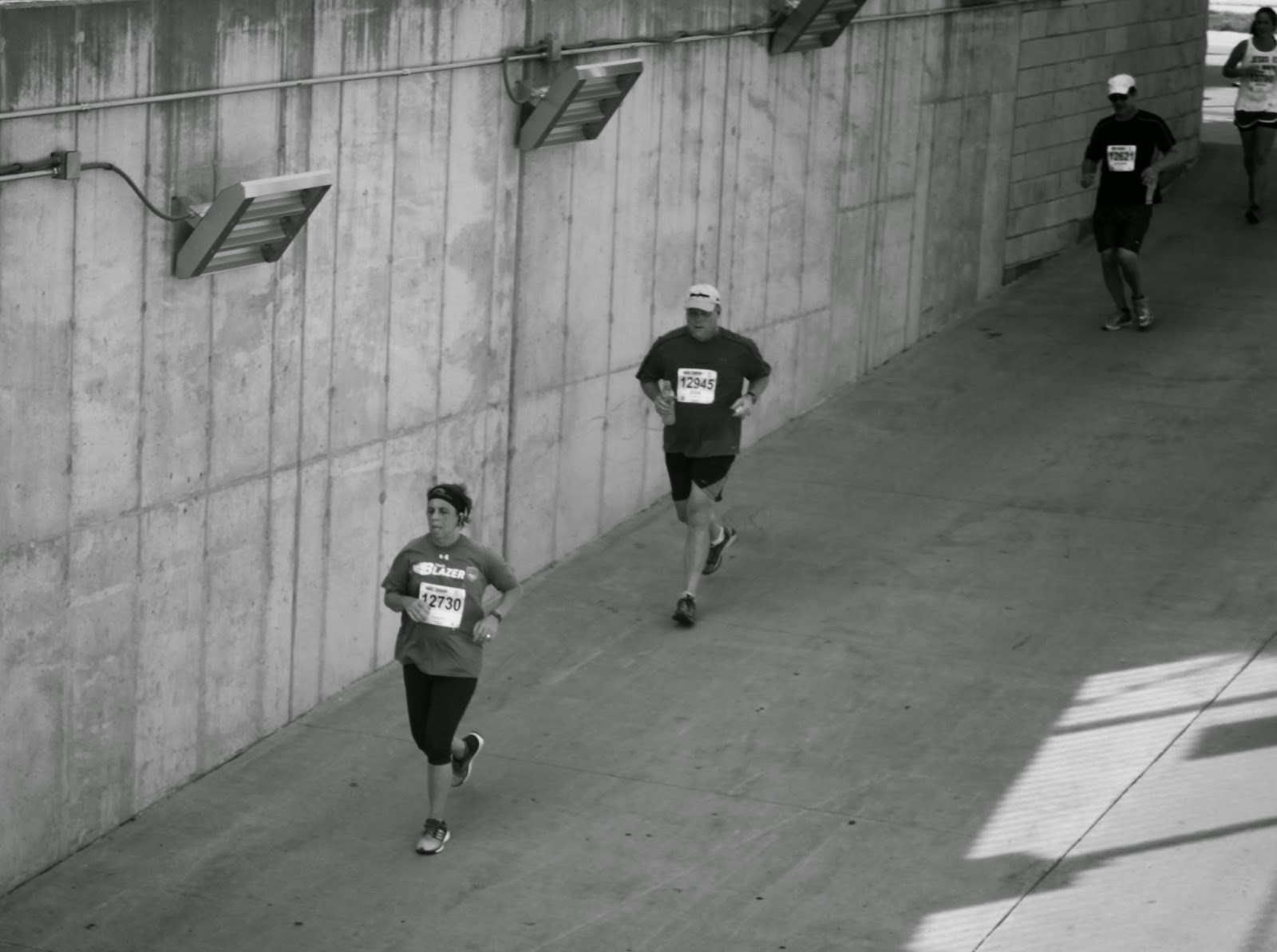 And I probably won't do it again. Not because I didn't love it, not because it's a crazy thing to do, but because I had to give up too much. Too many Sunday mornings. Too many hours spent on a treadmill when I could have been with my family. The time sacrifice required for training is not worth it at this juncture of my life.

But I'll still be on the trail when time allows, ignoring my pace in favor of watching hawks soar overhead. I can't actually walk right now, much less run. But I'll be back. In fact, I'm doing a sweet little 5k this weekend. It'll be a piece of cake topped with rainbows and unicorns.

Running is like childbirth. You forget about the pain, blinded by the adrenaline of love and sweat and the knowledge that I, you, can do what you set out to do. Sometimes you have to push yourself beyond your perceived capability. Because let's face the facts: there are no limits except the imaginary ones we think we have to live within. Your potential is the milky way.

So what if I sound like a self-help book? That shit's for real.