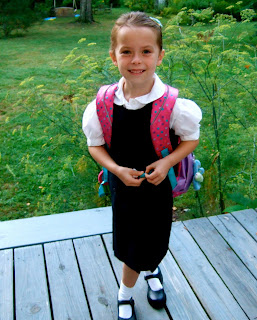 My belly button has been tender and sore all day.

On an another note (a coincidental one), this is Fiona's first day of Kindergarten. She has been a nervous wreck for weeks, but this morning, in her new uniform, she seemed OK. She was ready to jump that hurdle and get on with it. There was no angst in sight. Was she holding it all in, like she usually does? Yes, most likely.

Laura was in charge of getting her on the school bus. Fiona insisted on riding the bus on her first day. Mainly because her friend, our neighbor, was going to sit with her and hold her hand. Which she did.

I went to work, nervous for her, but confident that she would be safe. Man, was I ever wrong. 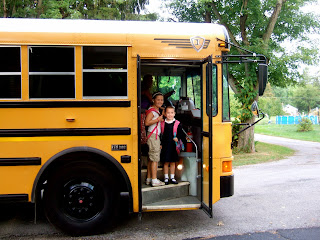 Look at her, getting on the bus. The safest place for a child, even though they are not equipped with seat belts or over protective mothers.

The bus was hit by a FREAKIN' CAR! On her first day. Police was called. The kids had to board a different bus, even though we told her to NEVER get on a bus if it wasn't bus #58. Her bus. Well, her bus is no longer safe.

The bus finally arrived, at 9:15 a.m. School starts at 8:55 a.m. Fiona seemed OK, but in a daze. The school greeters were offering doughnuts (because that's a healthful way to start your first day of school).

She made it through this day, despite the unforseen mishap and nerves and excessive sugar. She made three friends. Her only complaint was that her clothes are too slippery. She kept sliding off the bus seat.

And so, with this momentous milestone, I feel a shift. As though a part of me is slowly detaching. And along with this feeling of separation comes a mysterious pain in my belly button.

Email ThisBlogThis!Share to TwitterShare to FacebookShare to Pinterest
Labels: Parenting